In 2011, Martin Waymire was retained to plan and execute the launch of Bridge Magazine, an online news magazine providing in-depth coverage of the most pressing public policy issues facing Michigan. Bridge’s mission is to inform Michigan citizens about their state, amplify their views and explore the challenges of our civic life.

In our research prior to developing the 2015 digital strategy for Bridge, the Martin Waymire team closely reviewed traffic trends via Google Analytics and our tactics from 2014. Sessions from social media and Google AdWords grew by 530 percent from 2013 to 2014, and our star performer was Facebook, with 21.5 percent of overall traffic coming from that channel. Based on this data, we knew we wanted to devote much of our ad spend on Facebook, but we also wanted to experiment with advertising options on Twitter and Google.

In 2014, Martin Waymire spent much of the budget on promoted posts on Facebook, spending $10 to $15 per post and targeting Bridge Facebook fans and their friends. In 2015, the Martin Waymire team branched out into other types of advertising, including using different ad formats on Facebook and testing some Twitter advertising for key stories.

To begin 2015, the Martin Waymire team made sure all of Bridge’s social profiles were optimized for desktop and mobile viewing and updated Bridge’s Facebook page categorization, changing it from “Community Organization” to “Media/News/Publishing.” Additionally, we added special code to the Bridge website to create a custom Facebook pixel, which would allow us to advertise on Facebook to a custom audience of people who visited the Bridge website in the last 180 days. We also set a tentative weekly and monthly budget, based on our annual allowance. This gave us a ballpark range for each ad: major stories were promoted for $15 to $20, and smaller stories were promoted for $5 to $10.

On Twitter, we increased the number of daily posts from one or two posts per day to six or more posts per day. We also repurposed popular stories and spent a small portion of our budget on some targeted Twitter advertising.

Martin Waymire also ran Google search ads for Bridge, which cost nothing thanks to Bridge qualifying for a Google Grants account. Our team managed $10,000 in search ads per month, creating ads for new stories in 2015.

Digital strategy work by the Martin Waymire team contributed to 41 percent of the overall 2015 traffic and grew by 63 percent over our work in 2014. Social channels (particularly Facebook) also attracted the most new users to Bridge in 2015, with an 81 percent increase over 2014. 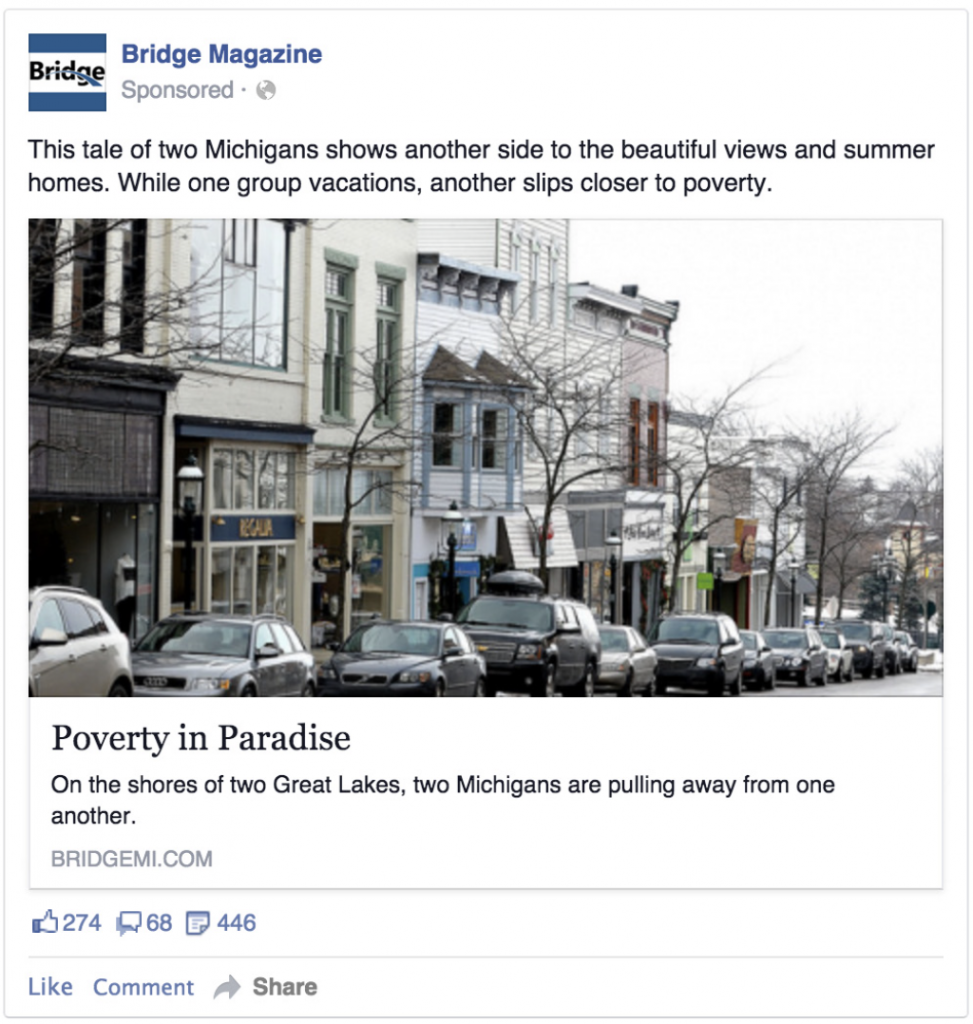 We offer clients our commitment to Michigan, because our driving passion is making our home state a better place.